A Look Back at 30+ Years of Website Design [With Examples]

Since the first website was published in 1991, web design has come a long way. This site, which was entirely text-based, signalled the start of what would become a digital evolution.

While memories of “under construction” GIFs and blinding background colours make me appreciative for how far the internet has come, there are some historical web design choices that deserve to be acknowledged.

Our website design timeline begins in the early 1990s. There was no such thing as a high-speed internet connection at the time. It was either dial-up modems or nothing. As a result, websites had to be designed for less-than-ideal connection speeds. They mostly resembled text walls — what we now refer to as “design layout” did not exist.

While later versions of HTML allowed for more complex designs, they remained very basic in comparison to today, consisting primarily of header, paragraph, and link tags. Visual elements and styling like typography, imagery, and navigation were things from the years that were yet to come.

While the purpose of these early sites was purely informational, we can see some design elements that are still relevant today. These old web pages were very lightweight and optimised for a slow internet connection, which we all still have from time to time. These design considerations took the user experience into account, which is something that today’s websites don’t always do, even with faster speeds.

Yes, today’s internet can handle media-rich websites… but it has some limitations. Large media files, heavy graphic design, and excessive animations can all contribute to higher bounce rates when load speeds aren’t as fast as we’d like. When considering complicated design, keep your user in mind and remember to keep it simple.

On-site page builders and spacer GIFs plagued the middle ages of online design. By the mid-1990s, web design had advanced in terms of structure as well as look. Designers began employing table-based layouts to arrange material, allowing for greater freedom and creativity. Sites were still text-heavy, but text could now be organised into columns, rows, and other navigational features for greater readability.

Table-based design is no longer the ideal option for your website for a variety of reasons, including heavy markup, sluggish load times, and aesthetic inconsistencies.

Regardless, this advancement was significant in the growth of web design since it was the first step toward non-linear page structure. Different elements could now be positioned in different sections of a web page, and designers had to think about how to deliver information to the user in the best way possible.

When it comes to navigation and content, page structure is still crucial. It has a big impact on how your site is perceived and interacted with by the user. While these factors may not have been at the forefront of web design in the middle ages, they are certainly at the forefront now.

Renaissance. Rebirth. Web design has had its fair share of reimaginings, but one of the first was with the debut of Flash. Flash, which was introduced in 1996, opened up a world of design possibilities that were not available with plain HTML. It was a fusion of virtual graphics and interactivity.

While many of the earlier design components remained, they were enhanced with animations, tiled backdrop pictures, neon colours, 3D buttons, splash pages, and other multimedia.

Flash signalled the beginning of visitor-focused design, as structure and navigation became more essential factors, and designers began to emphasize design and usability over sheer content.

Flash was a game changer, but it wasn’t here to stay. Flash is hardly utilized nowadays and is regarded as one of the most heinous SEO sins of all time. To achieve comparable effects, it is now common practise to use alternate methods such as CSS and JavaScript animations, or to embed clips from video hosting sites.

The early 2000s were a moment in web design where usability and flexibility were at the forefront.

A better knowledge of colour psychology also resulted in a greater usage of whitespace and a decrease in flashy hues such as neons. Links began to be introduced to icons rather than just text, resolution and pixelation became increasingly essential issues, and content strategy gained popularity.

People frequently scan websites for the information they want, therefore any website that makes this task easy receives a big check-mark. Savvy web designers recognise that most people do not read everything on a page and have a good understanding of how readers process information.

As a result, intuitively positioned content, graphically highlighted links, and simple navigation are just a few best practises that today’s websites should follow. Always keep usability in mind when designing!

Mid- to Late-2000s: The Industrial Revolution

The birth of Web 2.0 marks the start of the web design Industrial Revolution. It was at this time that things truly started to shift toward the modern web. The growth of multimedia apps, the emergence of interactive content, and the introduction of social media are just a few of the period’s defining characteristics.

Furthermore, these innovations substantially influenced how web design was… well, done. Aesthetic modifications included improved colour distribution, more use of icons, and a focus on typography.

Above all, design became about content, and content became about search engine optimization. With the user firmly at the heart of design, selling items (at least overtly) became a secondary role of websites – it was now all about being found.

As previously said, the evolution of Web 2.0 witnessed the rise of SEO as a factor. While these strategies have evolved over time, considering your website in terms of SEO is still a top priority for the majority of profitable company websites.

SEO requires content, and content became a major priority of site design during this time period. Keyword optimization, inbound and outbound linking, authorship, tagging, and syndication technologies such as RSS have all evolved into natural design features. While link spamming and keyword jamming quickly exploited these strategies, they are no longer effective and (hopefully) have largely died out.

Today, more than two decades after the first website was published, web design has firmly established itself as an indispensable component of any solid marketing plan. According to recent study, 50 percent of today’s consumers believe that website design is critical to a company’s brand.

You may have noticed that our website’s current design incorporates all of these features:

The mobile web is another important milestone in the evolution of online design. Since the introduction of the iPhone in 2007, there has been a reimagining of how websites are designed to accommodate the rising number of mobile web users. This includes various mobile frameworks that adopt a “mobile-first” approach, as well as an increased emphasis on mobile performance optimization, because phones typically lack the processing speed or connection strength of a conventional PC.

This digital revolution has also given rise to responsive design, in which page components change to the width of the browser window, allowing websites to appear fantastic on any device or screen. Given that mobile users account for more than half of all internet traffic, responsive design is now required to ensure a positive mobile user experience.

Where will websites go next?

If there is one component that has influenced all of these advancements, it is content. Every design element on this page has been tweaked to deliver the most relevant material to the visitor in the most efficient and effective way possible. This era of online design is defined by concepts such as accessibility, flexibility, and usability.

Though there is much more we can accomplish with web design today, it’s interesting to take a look back at where we started. Looking at how far web design has come, it’s amazing to imagine where it will go in the next 20 years. 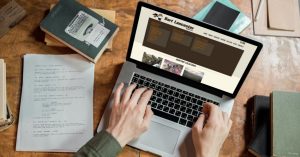 Why Every Outfitter Needs A Website [How Websites Help] 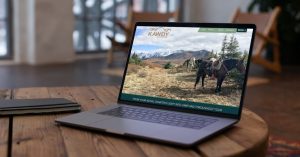